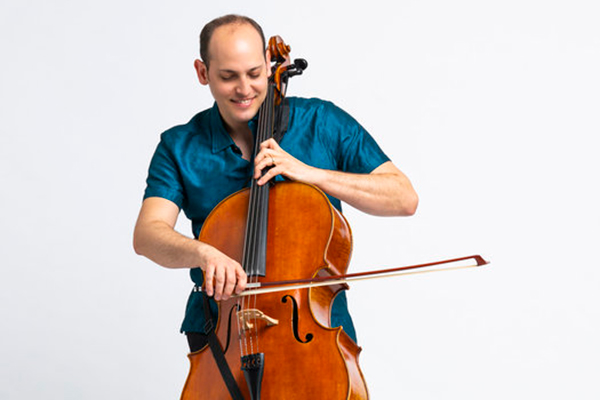 Hailed by Yo-Yo Ma as the “ideal musician of the 21st Century”, Mike Block is a pioneering multi-style cellist, composer, and educator living in Boston, acclaimed by the NY Times for his “vital rich-hued solo playing”. While still studying at the Juilliard School, Mike joined Yo-Yo Ma’s Silk Road Ensemble, and shortly thereafter also joined Mark O’Connor’s Appalachia Waltz Trio. After becoming one of the first wave of cellists to adopt a strap in order to stand and move while playing, Mike was the first standing cellist to perform at Carnegie Hall, using a cello strap of his own design, called the Block Strap, a performance which the NY Times called “Breathless … Half dance, half dare.” The Mike Block String Camp began in 2010, and takes place each summer in Vero Beach, Florida, empowering string players to learn a variety of styles from a world-class faculty. Mike is also the director of Silkroad’s Global Musician Workshop.  Mike is an active recording artist of original material, folk music, cross-cultural collaborations, and he has an ongoing project to record all of the Bach cello suites in acoustically glorious bathrooms of famous concert halls, via BachInTheBathroom.com. In 2012, Mike was appointed Associate Professor at the Berklee College of Music, and he is the director of the Multi-Style Online Cello School at ArtistWorks.com.